We’re living in unprecedented times, with schools and businesses closing, along with mandatory quarantines, due to the global coronavirus pandemic. Because of this, I thought I’d write a post on the differences between viral infections vs bacterial infections. Viruses are much smaller than bacteria, the majority cause disease, including cancer, and their survival is dependent on a host. In contrast, most bacteria are harmless, and are ubiquitous in the environment, they’re in the water, air, and soil, and can even be found on plants and animals. Here are more facts about viruses and bacteria. 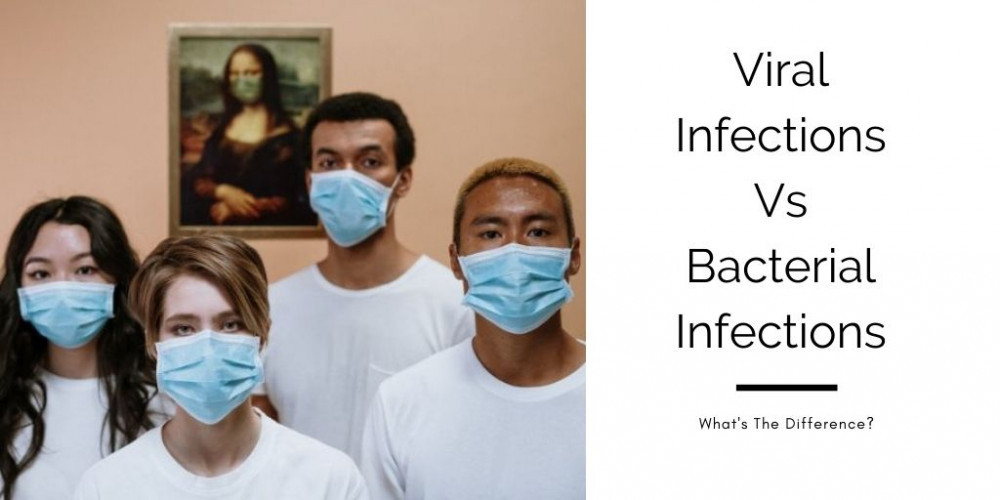 Viruses Can’t Live Without A Host

Viruses are able to reproduce by attaching to cells. They do this because they can’t survive without a host. Once they attach themselves to cells, they use cellular components to reprogram those cells to produce new viruses. This reproduction causes cells to explode and die. Viruses are able to turn healthy cells into malignant ones.

In fact, there are several oncoviruses that have been linked to cancer, including:

The reason antibiotics don’t work to kick colds or the flu is because these conditions are caused by a virus rather than a bacterium. Most sore throats and coughs are viral in nature, however strep throat and whooping cough are bacterial infections, and can thus be treated with antibiotics. Both viruses and bacteria can cause fevers.

Vaccines are used to prevent viral infections, which is why researchers worldwide are furiously trying to develop a vaccine for the coronavirus. Antiviral medications are used in some cases to prevent viral reproduction or to increase immune function. Since viruses must run their course before symptoms abate, symptom-relief is the primary course of action for viral infections. If you’ve experienced any type of infection caused by a virus, you know this to be true.

Certain populations are at increased risk of developing secondary bacterial infections, such as the elderly, those with underlying health conditions, and people with asthma. It’s not uncommon for an older person to be admitted to the hospital for a viral infection, only to end up needing treatment for pneumonia. The most significant period of susceptibility to bacterial infections is not when the virus initially takes hold, but rather during the time period when it should be clearing.

Both Infections Spread In Similar Ways

Although, viruses and bacteria differ in many aspects, the infections they cause are spread in similar ways. Sneezing, coughing, contact with people who are infected or contaminated surfaces are common modes of transmission. Also, contact with livestock, pets, or fleas and ticks, as is the case with Lyme disease, a vector-borne disease caused by the bacterium Borrelia burgdorferi. 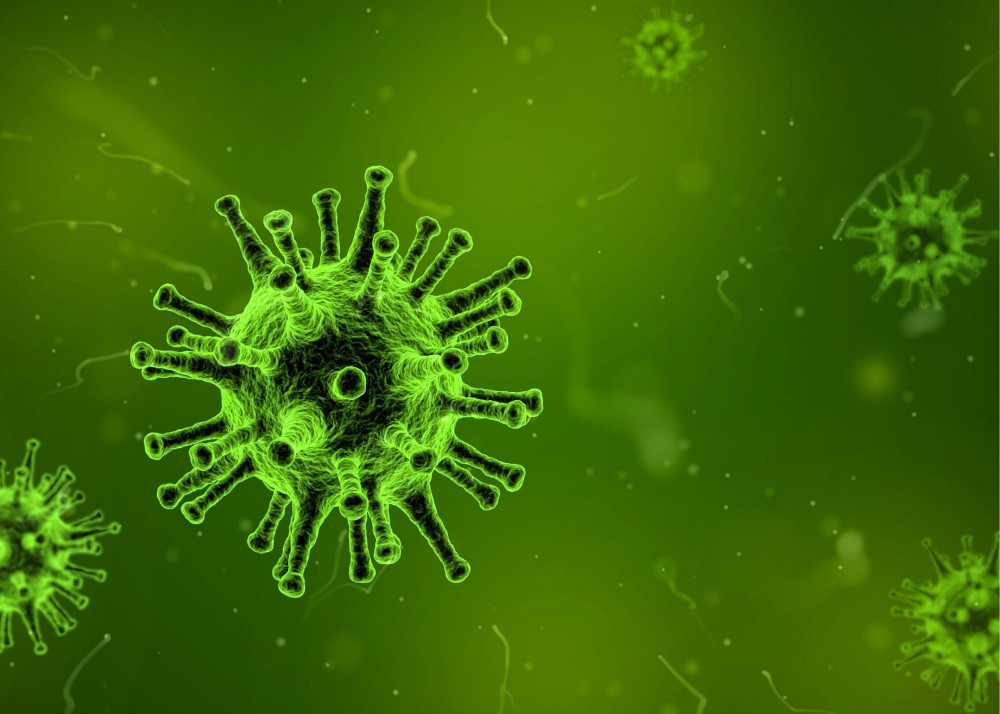 Viruses And Bacteria Can Both Be Contagious

Measles is the most contagious airborne virus. A person with the disease can potentially infect up to 18 people. Ebola, another viral disease, can be transmitted to two susceptible people if they come into contact with an infected person’s bodily fluids.

H. pylori is a common stomach bacterium that is highly contagious and can be passed via saliva. It’s not atypical that an entire family can become infected just from one infected member. Not all infections are contagious. Some, like Rocky Mountain spotted fever can be spread through tick bites or acquired through eating contaminated food, as is the case with botulism. Other infections caused by bacteria, including tetanus, can gain entrance into the body through a wound.

R0 stands for “R naught,” a mathematical term that designates how contagious a disease is. It’s also called the reproduction number because it denotes a disease’s ability to reproduce. Infections reproduce by spreading to increasingly more and more people.  If a disease has an R0 less than 1, it will eventually decline and die out.

This is because each infected person only has the capability of infecting less than one other person. Diseases with an R0 value equal to 1 will not lead to pandemics because each person that is infected will only cause one new infection. Diseases with R naughts over 1 can cause pandemics due to the spread of the disease, with each infected person causing more than one new infection.

To give you some perspective on how contagious COVID-19 is, measles has an R0 of 12-18, ebola an R0  between 1.5-2.5, and SARS-CoV-2  an R0 of 2.2. Keep in mind, R naught values apply only to populations where no one has had the disease or been vaccinated, along with an inability to contain the spread of the disease. The reproduction number is only one factor, however. For instance, taking into account the R naught values of both the measles and ebola, you can see that measles is significantly more contagious, yet more people died of ebola.

Viruses and bacteria both cause varying degrees of infection, ranging from mild to deadly. Treatment is dependent on whether the infection is caused by a virus or bacterium. This can be difficult to determine at times because both types of infections can manifest similar symptoms. Blood, urine, and stool samples are used to identify the specific type of pathogen.

Bacterial infections are treated with antibiotics, which can be lifesaving, because they either halt the spread of the bacteria or kill it altogether. You never want to use antibiotics for viral infections: firstly, they won’t be effective, and secondly, they increase the risk of antibiotic resistance, which is a growing health concern. Antibiotics should only be given when absolutely necessary.

Viruses Are Smaller Than Bacteria

Viruses are microscopic organisms that are significantly smaller than bacteria, and can only be seen using a microscope. If you took the smallest bacterium (which is also microscopic) and compared it to the largest virus, the virus would be smaller. Viruses are composed of genetic material, including DNA or RNA, surrounded by a protein coating.

Bacteria are single-celled microbes, called prokaryotes, that have no nucleus. They are typically a few micrometers in length and exist in communities. Fresh water and soil are teeming with millions of bacteria, which are thought to be the first organisms to appear on planet earth.

Bacteria can be both infectious or beneficial. For example, fermentation is caused by bacteria transforming carbohydrates into lactic acid. The following fact underscores the importance of bacteria: the human body contains up to 10 times more bacterial cells than it does human ones. We live symbiotically together with these organisms.

The beneficial bacteria that make up a large percentage of the microbiome are vital for healthy immune function, digestion, detoxification, and vitamin synthesis. The skin itself is a diverse ecosystem that hosts more than 500 bacterial species.

Bacterium Live Outside The Cell / Viruses Are Intracellular

Unlike bacteria, viruses are not cells, and can only replicate intracellularly. They’re not capable of metabolizing independently, but need a host, such as an animal or human, to replicate. Once attached to a host, viruses cause infections by multiplying.

Bacteria does not need a host to survive, and can thrive inside or outside of the body. Bacteria are complex cells that are either rod, spiral, or spherical-shaped. They can live in all kinds of environments, including extreme cold or heat. There are trillions of bacterial strains, most do not pose a threat to humans, although some can be life-threatening.

The Coronavirus Is A Mutated Virus

COVID-19 is caused by a virus believed to be carried by bats. Last November, the virus mutated and evolved into SARS-CoV-2, the viral strain responsible for the pandemic we’re now experiencing. Bats, carry dozens if not more, coronavirus strains that are part of their natural microbiome. These strains live symbiotically with the bats without causing harm.

Two mutations in the coronavirus resulted in what is now COVID-19. As these viruses reproduce, they go through genetic changes. These mutations enable the viruses to be transferred to humans or to other animals. The first mutation altered the spike-like structures that protrude from the virus, allowing it to attach to the ACE2 proteins that line the respiratory tract. Knowledge of the molecular structure of the ACE protein will be an instrumental factor in the development of a coronavirus vaccine.

The second critical mutation enabled the virus, which uses furin proteins, to tightly bind to cells in the throat and lungs by slicing through other proteins. While these mutations may have taken place in bats, either could have occurred in an asymptomatic, infected person who had a previous strain of the virus. However, it is hypothesized that the mutation likely took place in an intermediate host.

Infections occur when pathogenic organisms enter the body. Viruses and bacteria both cause infections, but aren’t the only culprits. Fungus, protozoans, and parasites also cause disease.

Infections can range in severity from making you feel tired and run-down to full-fledged epidemics, as is the case with the coronavirus.

How infections are treated depends on the nature of the organism that is causing it. Fortunately, we have vaccines and antibiotics for some of the most deadly viral and bacterial infections.

Were you aware of the differences between viruses and bacteria? Let me know in the comments:)

(1) WebMD: How do viruses differ from bacteria?

(3) LiveScience: What Are Viruses?

(5) healthline: Why the Gut Microbiome Is Crucial For Your Health

(13) MedicalNewsToday: Everything you need to know about infections

(15) Mayo Clinic: Bacterial vs. viral infections: How do they differ?

(18) Scientific American: Understanding the Measles Outbreak with this One Weird Number