What are mycotoxins? They’re toxic compounds created by fungus that have the potential to cause dysfunction in the body, including immune deficiencies and cancer. These toxins grow on common food sources, such as grains, coffee beans, and dried fruit.  In this post, I’ll be sharing facts about mycotoxins, and what you can do to prevent exposure and ameliorate the effects if you are exposed. 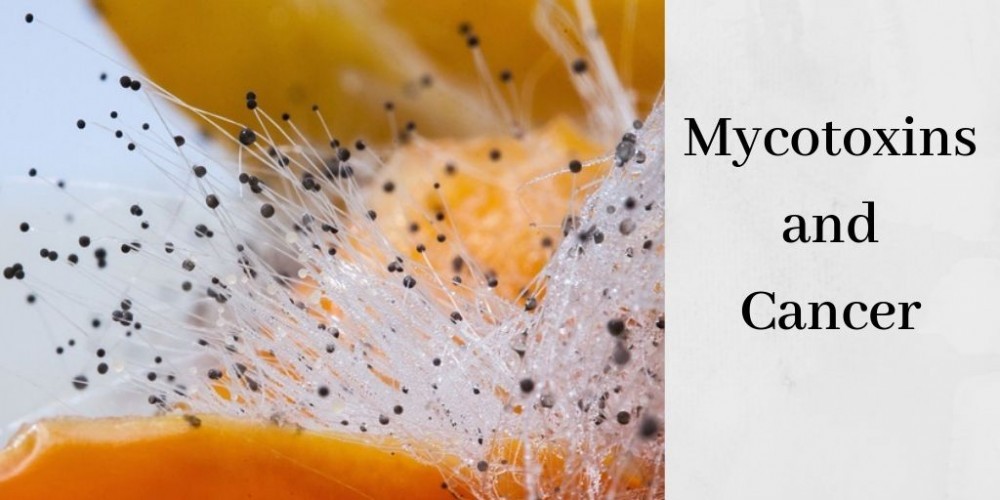 Hundreds of mycotoxins have been identified, but only a handful have gained notoriety due to their adverse impact on health, along with the degree to which they occur in food. Mycotoxins are pervasive, they’re in the food supply, in the air we breathe, in the walls of our homes, and in products we put on our bodies. For this reason, it’s vital to learn about the sources of mycotoxins, the symptoms associated with them, and how to protect yourself from their damage.

Mycotoxins are chemically stable, meaning they are resistant to food processing and cooking. Mold can grow before harvesting or when the food is stored, especially if the storage conditions are damp and humid. Mold infestation is thought to affect up to 25% of the food and feed supply.

Exposure can occur directly or indirectly, either by consuming the infected food itself or indirectly from exposure to animals that have been fed contaminated feed, such as drinking their milk.

Mycotoxins are secondary metabolites produced from fungi. They are implicated in disease and have the potential to be fatal. For these reasons it’s not surprising they are referred to as fungal poisons. Mycotoxins are classified according to the organs they target: for instance, nephrotoxins affect the kidneys, neurotoxins the brain, immunotoxins the immune system, and hepatotoxins the liver.

Here are a few known mycotoxins, where they are found, and the conditions they cause:

1. Aflatoxin: Found on peanuts, corn, and peanut butter, aflatoxin is carcinogenic and is produced by the species of mold Aspergillus. Aflatoxin B1 is extremely toxic and is implicated in autoimmunity, food allergies, cancer, and liver disease. It thrives in hot, humid areas.

2. Fumonisins: Found in corn, including animal feed, and in smaller occurrences sorghum and rice. Fumonisin is produced by the Fusarium verticilloides and proliferatum strains of mold. These strains are tumor promoters that may possibly cause esophageal tumors in particular subsets of the population. Fumonisins may also be involved in neural tube defects.

3. Patulin: Found on damaged, rotting fruit, especially apples, peaches, pears, and olives. Patulin is produced by the Penicillium and Aspergillus strains, and can cause GI disturbances, including intestinal hemorrhage, reduced intestinal barrier function, and ulcers. It is nephrotoxic and immunotoxic.

It also contaminates heating ducts and water-damaged houses. It’s produced by various Aspergillus and Penicillium species. Ochratoxin A is one of the most abundant mycotoxins that contaminates food. It is potentially carcinogenic and neurotoxic, with a high affinity for the brain. Due to its mutagenic properties, It can cause oxidative damage to DNA. It has been found in human breast milk and blood.

5. Citrinin: Found in old grains and fruit, citrinin is produced by the Penicillium, Aspergillus, and Monascus fungal species. It is nephrotoxic, hepatotoxic, and cytotoxic, meaning it’s toxic to human cells.

6. Zearalenone: Commonly found on corn, but can also be found on wheat, rye, sorghum, and barley. Zearalenone is produced by the species of fungus, Fusarium graminearum. Grains contaminated with this mycotoxin have a pink pigment. Zearalenone and its metabolites are estrogenic, and may be implicated in precocious puberty in young children.

Aflatoxins, patulin, fumonisins, zearalenone, and ochratoxin A are the most commonly observed mycotoxins that are a threat to both livestock and humans.

A large percentage of cancers are linked to mycotoxins. For instance, zearalenone and ochratoxin signal estrogenically, meaning they have the ability to bind to estrogen receptors on the cells where they stimulate growth and proliferation.

In estrogen-related cancers, including female cancers, prostate cancer, colorectal and esophageal cancers, estrogen itself may not be stimulating the receptors, but rather mycotoxins. Mold toxins are endocrine disruptors, notably Zearalenone, which has a higher estrogen-receptor binding capacity when compared to other endocrine disruptors like bisphenol A and DDT.

Interestingly, intestinal microflora in the human body can degrade bisphenol A but not zearalenone. Mycotoxins can damage the nervous system, lungs, and kidneys. They can also damage DNA, a risk factor for cancer. Fungi have the ability to rapidly mutate.

Toxins and The Liver

Toxins also place a heavy burden on the liver. When the liver can’t effectively clear toxins, they accumulate. This can negatively impact immune function, which is a significant risk factor for developing cancer, because ultimately, it’s the immune system that will protect you from getting cancer.

How a person reacts to mold will depend on the state of their general health and immune system, their age, and the degree and duration of toxin exposure. The elderly and children with compromised immune systems are at the highest risk.

For instance, being exposed to large amounts of mold toxins can cause acute symptoms, such as difficulty breathing, headaches, and vomiting, whereas chronic, low-grade exposure that takes place over time can present as immune, respiratory, and neurological problems, damage to internal organs, and cancer.

Fungal toxins can potentially damage every system in the body by inhibiting protein and DNA synthesis, along with mitochondrial protein synthesis. They can also impair the functioning of ribosomes. Alfatoxins, in particular, are carcinogenic compounds that are acutely toxic. They’re mutagenic and immunosuppressive, which sets the body up for disease.

Immune system suppression can initiate bacterial and viral infections, including herpes, and Epstein Barr, the virus that causes chronic fatigue syndrome. Neurological symptoms can be the result of mycotoxin exposure, due to the degradation of the myelin sheath that surrounds the nerves, causing muscle twitches and weakness, headaches, and even seizures. Mycotoxicity can cause persistent symptoms among which are:

Cancer and autoimmunity can be the result from long-term exposure to mycotoxins.

Strategies To Protect Yourself From Mycotoxicity

Removing yourself from the exposure is the primary step in preventing and exacerbating mold toxicity. This is difficult if you have mold in your house that you are being exposed to on a daily basis. Consult a professional to confirm the presence of mold, and what can be done to rectify the problem. It’s possible that your workplace may also be contaminated.

There are strategies you can put in place to protect yourself from mycotoxins. Begin by cleaning up your food supply. Ideally, eliminate grains and corn from your diet, two common sources of mycotoxins. These foods are inflammatory and hard to digest, so it’s a good idea to eliminate them anyway. If you must eat them, make sure they’re non-GMO and organic.

Most corn sold in the USA is GMO, another reason to ditch it entirely. Reduce the amount of sugar you eat and the amount of alcohol you drink. Soak, sprout, and ferment grains, nuts, seeds and beans to reduce the occurrence of mold and minimize the harmful effects.

Store nuts and grains in the freezer to prolong shelf life. If this isn’t an option for some reason, make sure you store them in a cool, dry place with a moisture level ideally below <14%. Replace peanut butter with other nut butters, which are less likely to contain mycotoxins. Buy your fruit and vegetables from local farmers or food co-ops, and buy only free-range and grass-fed meat. Do a parasite cleanse once or twice a year to eliminate mycotoxins from your GI tract, and periodically detoxify your liver with liver-cleansing herbs. Infrared saunas are exceptional for stimulating detoxification through the skin.

Invest in a high-quality air filter to clean the air of mold spores. I use an air purifier that uses natural photocatalysis, ozone, and ultraviolet light to clean the air. I have it in my bedroom and run it all night. If you already suffer from respiratory or allergic reactions, mold exposure will intensify the symptoms.

Interestingly, indoor air has been found to be even more toxic than outdoor air. Keep your house, and especially your basement and bathrooms, well ventilated. The primary method of exposure to indoor toxins is by breathing in mold spores that are in the air.

Use a dehumidifier to reduce moisture levels in the air. Water is a breeding ground for mold so watch for any leaks and fix them immediately. Ventilate your bathroom after showering by opening a window or turning on a fan for 20 to 30 minutes. Wipe down the shower after using.

If you have a swamp cooler, drain it regularly. Install exhaust fans in the kitchen, laundry room, and bathrooms. Check that your gutters and downspouts are clean and draining properly a safe distance away from the foundation of your house.

If you know you have mold in your house and the area is larger than 3 foot square, you’ll want to hire an expert to get rid of it, especially if it’s in your walls, and particularly if you have asthma, other respiratory conditions, or a suppressed immune system.

If the mold is contained in a small area, you can try cleaning it yourself with ammonia, bleach, or white vinegar. Surfaces like glass and tile will be easier to clean than wood or sheet rock. Always wear a mask or N-95 respirator over your nose and mouth to prevent breathing in spores. Wear gloves that cover your entire lower arm. Goggles will protect your eyes from mold spores.

Undiluted white vinegar can be used on hard surfaces in bathrooms, laundry rooms, and kitchens. Bleach also kills mold. Use one cup of bleach per gallon of water. Apply to the moldy surface and leave on without rinsing. If you have moldy grout, add a little dish soap to the bleach solution. It will help penetrate surfaces that are porous. Be sure and rinse the area when using dish soap.

You can also use a 50/50 solution of water and ammonia. Spray it on the infected area and leave on for three hours before rinsing. Never use ammonia with bleach or all-purpose cleaners as it can emit toxic fumes.

If you have mold outside on a deck or siding, remove it immediately. Mold can damage exterior surfaces, such as stucco and wood. Most significantly, it can eventually make its way indoors. Generously spray a 1-to-10 bleach and water solution on the area. Using a stiff brush, dip it into the mixture and scrub the area. Leave the solution on for up to 20 minutes before rinsing with a hose. Don’t forget to wear gloves.

Natural remedies and herbs can help to clear mold from the body:

Use binders, such as activated charcoal, GI detox, or clays to bind mycotoxins and eliminate them from the body. However, only use binders if you’re not constipated.

There are many strategies you can employ on a daily basis to prevent cancer and other health conditions. Reducing your exposure to mycotoxins is key, as is awareness and education. Know where mycotoxins lurk to mitigate your exposure. Clean up your diet, store food in the freezer or a cool, dry place, take natural supplements to detoxify mold, and implement detoxification techniques to decrease the toxic load on your body.

Did you know mycotoxins are implicated in cancer? Let me know in the comments:)

10 thoughts on “What Are Mycotoxins and Why You Should Care?”