Turmeric, or Curcuma longa, is a perennial herb and member of the ginger family. Curcumin is the primary active constituent in the spice turmeric, and has been a highly-touted supplement used for pain and inflammation. Fermented foods have been in the forefront due to their incredible benefits on digestion and the microbiome. Combine the two and you have a powerful, health-promoting remedy. Here are 5 benefits of fermented turmeric. 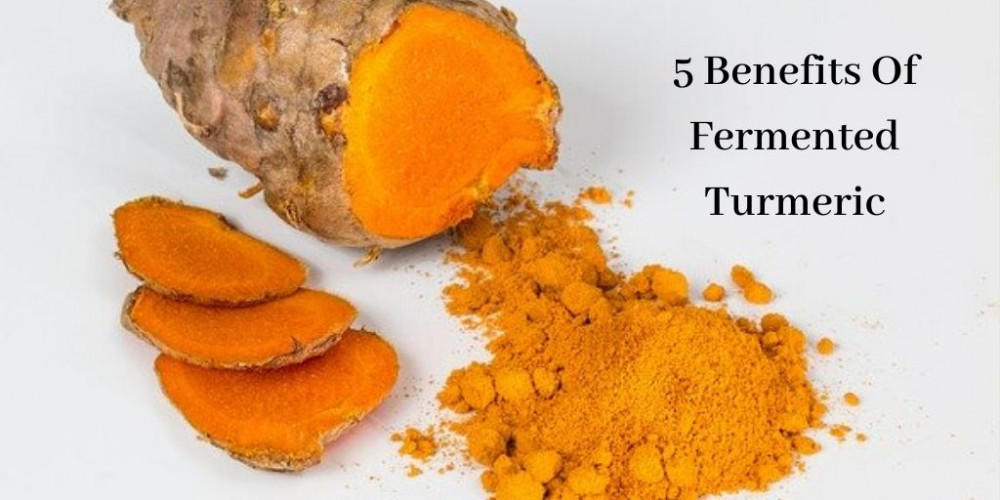 Fermentation is the anaerobic process in which a carbohydrate is converted into an alcohol, acid, or gas by yeast or bacteria. Acids and alcohol are natural preservatives and are what give fermented foods their characteristic tartness. For instance, wine is the result of sugars being chemically converted into ethanol. When a food is fermented, it is broken down from a complex substance into a simple one.

Fermentation increases the bioavailability of turmeric’s active compounds, namely curcumin, while increasing its antioxidant activity and concentration. In fact, turmeric, that’s been fermented, is up to 1 1/2 times more potent than unfermented turmeric.

1. Has Strong Antioxidant and Anti-Inflammatory Properties

Curcumin is one of the three active curcuminoids in turmeric. It’s a polyphenol that gives the spice turmeric its bright yellow color. It has strong adaptogenic properties, meaning it helps the body adapt to stress. Better adaptation to stress dampens the adrenal response, and lowers levels of the stress hormone cortisol. This brings the body back into homeostasis, or balance, resulting in more energy and endurance, and less fatigue and inflammation.

Inflammation underlies all chronic disease. The active compounds in turmeric inhibit molecules that promote inflammation. One such molecule is NF-kB, which induces inflammation by turning on inflammatory genes in the nucleus of the cell, and is thought to play a fundamental role in the development of chronic disease. COX-2 is an enzyme that triggers inflammatory prostaglandins to be released. Curcumin is a COX-2 inhibitor, meaning it prevents the enzyme from being triggered, thereby reducing inflammation. NSAIDs are COX-2 inhibitors and work on this same enzyme.

Curcumin further inhibits inflammation by blocking Nf-kB and by interacting with immune system molecules involved in inflammatory reactions, namely tumor necrosis factor-alpha (TNFa) and interleukins (ILs). Curcuminoids have been shown to be as effective as anti-inflammatory drugs in reducing pain and inflammation, excluding the harmful side effects.

Oxidative stress plays a dominant role in chronic disease, as well, through the action of free radicals, which are highly unstable molecules that lack an electron. Antioxidants promote health due to their ability to neutralize free radicals and prevent oxidative damage. Because of its chemical structure, curcumin is a powerful antioxidant that not only fights free-radical damage, but increases the body’s internal antioxidant defenses.

2. Is Anti-Microbial and Boosts Immune Function

Studies highlighting the antibacterial activity of curcumin show its efficacy against both gram-positive and gram-negative bacteria, namely Staphylococcus aureus, Enterococcus faecalis, Escherichia coli, and Pseudomonas aeruginosa. These particular strains of bacteria are prominent in hospital settings. Curcumin has shown impressive antibacterial potential against all four strains.

Curcumin has also been shown to have a wide range of activity against numerous viruses, fungi, parasites, and biofilms, the slimy encasements that protect pathogenic organisms. No toxicity has been noted using substantial doses – up to eight grams a day.

Fermented foods are nutritional powerhouses bursting with probiotics to support digestion and immunity. Probiotics are living bacteria that modulate the immune system, and regulate the function of immune cells within the mucosa and intestinal epithelial cells. Probiotics show potential against fighting viral infections, allergies, and reactions to vaccinations, along with therapeutic responses in terms of disease prevention and treatment.

Curcumin was found to almost triple the expression of a gene that encodes the protein cathelicidin antimicrobial peptide (CAMP). This peptide fights viruses, fungi, and bacteria the immune system has not yet targeted. CAMP has the ability to combat a broad range of bacteria, including the bacteria responsible for tuberculosis. The effect curcumin has on CAMP is significant for improving immune function, while exhibiting it’s antioxidant, analgesic, antiseptic, and anti-inflammatory benefits. The accumulation of this type of plaque is a hallmark of Alzheimer’s disease, and a major contributor to neurodegeneration.

Alzheimer’s and dementia are both inflammatory degenerative diseases that affect millions of people worldwide.

Inflammation prevents vital nutrients and blood flow from reaching the brain by compromising circulation. The anti-inflammatory properties of turmeric improve circulation, enabling the brain to receive a steady supply of oxygen and nutrition. Not only is curcumin preventative, it’s also been shown to reverse cognitive impairments in Alzheimer’s patients.

Turmeric aids in mental clarity, memory, and learning by stimulating the production of brain cells, while also stimulating serotonin and dopamine, two key neurotransmitters. Serotonin is the neurotransmitter associated with mood, positive emotions, sleep, and digestion. Dopamine is also a feel-good neurotransmitter that boosts both mood and motivation.

Dopamine is the brain’s reward center, and correlates with motivation and pleasure. Curcumin increases low levels of both serotonin and dopamine by modulating neurotransmission in the brain, and by elevating neurotrophic factors, such as brain derived neurotrophic factor (BDNF). The curcuminoids in turmeric have been studied for their active role in treating disorders of the central nervous system, including epilepsy, major depression and other neuropsychiatric disorders.

Although, the exact mechanism is not understood, curcumin is thought to inhibit the expression of reactive astrocytes to prevent cell death. Due to it’s low-molecular weight it’s able to penetrate the blood-brain barrier to enhance neurogenesis in the hippocampus by increasing the amount of newly generated cells in the dentate gyrus region. Supplementation with fermented turmeric may rival the effects of SSRIs.

The liver is a vitally important organ that is responsible for numerous functions in the body. It’s not only essential for the detoxification and excretion of both exogenous and endogenous compounds, but also plays a key role in metabolism, blood-sugar control, fat-burning, and immunity. The liver works in tandem with organs in the digestive system, including the pancreas, stomach, small intestine, and gallbladder, and is a storage site for nutrients.

Fermented turmeric improves liver function, is hepatoprotective, and has been shown to decrease elevated liver enzymes, ALT and AST, which are markers of liver damage, while simultaneously helping the enzymes to function better. Due to its impressive antioxidant profile, fermented turmeric is efficacious at reducing the oxidative stress in the liver caused by toxic compounds, while boosting the body’s endogenous antioxidants.

Curcumin quells inflammation in the liver by blocking Nf-kB, a key inflammatory pathway that stimulates the release of pro-inflammatory cytokines that correlate with damage and disease, while also suppressing TGF-B1, an inflammatory cytokine involved in liver fibrosis and cirrhosis. Curcumin is showing promise in repairing damaged cells, and has shown therapeutic effects against non-alcoholic fatty liver disease and hepatitis B and C.

Turmeric contains powerful phytochemicals that have been used medicinally for centuries. Cancer is the result of cell signaling pathways becoming dysregulated due to alterations in regulatory proteins. Curcumin has been shown to modulate these proteins through a variety of molecular mechanisms. It’s also been shown to inhibit carcinogenicity by modulating the cell cycle through the binding of molecular targets, such as growth factors, enzymes, inflammatory cytokines, and transcription factors.

The anti-cancer properties of curcumin have been found to have an effect on multiple biological pathways that are involved in oncogene expression, cell cycle regulation, cell proliferation, mutagenesis, apoptosis, metastasis, and angiogenesis. One such pathway is via the inhibition of the expression of nuclear factor NF-kB, a transcription factor involved in cell growth and differentiation, inflammation, apoptosis, and immunity. Although, there aren’t a lot of studies on fermented turmeric and cancer, research has shown that it has an affinity for identifying and targeting malignant cells, while inhibiting their growth.

Angiogenesis is the development of new blood vessels, which supply oxygen and nutrients to tumors, allowing them to grow and thrive. Metastases is a process whereby cancer spreads from its original site to other organs in the body.  Apoptosis, or programmed cell death, is a preventative mechanism in which macrophages within the immune system kill bacteria and eradicate rogue cells, including cancer cells, before they can take hold.

Notably, curcumin has exhibited chemoprotective effects in colon cancer by activating the nuclear vitamin D receptor. Studies have shown its favorable effects on multiple cancers, including cancers of the liver, lung, breast, brain, and bone. Both human and animal studies have proven its safety in very high doses. Curcuminoids have been given before and after chemotherapy to enhance its effect, while ameliorating uncomfortable side effects.

Fermenting turmeric exponentially multiples the benefits by increasing the bioavailability of the active constituents it contains. It also enables better absorption. Curcumin prevents neurodegeneration, improves liver function, reduces microbial load, and is a potent antioxidant and anti-inflammatory. It’s also a powerful remedy for cancer. This pungent, deeply-colored herb has been revered for centuries, not only as a culinary spice, but for its incredible medicinal properties.

Have you heard of fermented turmeric? Let me know in the comments:)

(2) NCBI: Innate immunity and transcription of MGAT-III and Toll-like receptors in Alzheimer’s disease patients are improved by bisdemethoxycurcumin

(7) Natural Medicine Journal: Should Curcumin Be Used with Chemotherapy?

(8) NCBI: Curcumin is a pleiotropic molecule that interacts with multiple targets involved in inflammatory reaction such as tumor necrosis factor-alpha (TNFα) and interleukins (ILs)

(9) NCBI: A Review on Antibacterial, Antiviral, and Antifungal Activity of Curcumin

(11) Biology Wise: What is Fermentation?

(13) The Free Dictionary By Farlex: NF-kappaB

(14) NCBI: an Overview of Curcumin in Neurological Disorders

4 thoughts on “5 Benefits Of Fermented Turmeric”