Medications have side effects. Many drugs on the market today can impair memory, although you might not correlate your cognitive decline, and inability to remember, with your daily medication. In this post, I’ll be sharing information about several commonly-prescribed medications that cause memory loss. If you’re taking any of the drugs mentioned, you might want to re-evaluate your options. 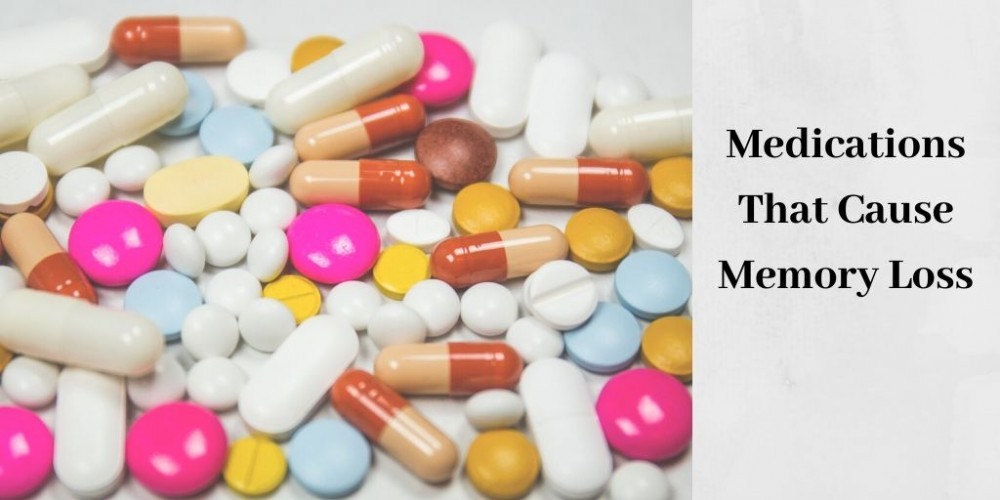 Millions of people worldwide are on painkillers, antibiotics, antidepressants, statins, blood-pressure medications, and sleeping pills. Below are 10 drugs, that fall within these categories, that can negatively impact memory:

Medications That Cause Memory Loss

Xanax (generic name, alprazola) is a benzodiazepine and anxiolytic prescribed for anxiety and panic disorders. It works by reducing excitatory activity in the brain, and depresses the central nervous system to produce a calming effect.

Other side effects, besides memory loss, include confusion, fatigue, slurred speech, drowsiness, and decreased coordination. Long-term use of benzodiazepines is linked to drug dependence, reduced attention and concentration, and cognitive impairments, even after the drug is discontinued.

Valium boosts the activity of GABA, a neurotransmitter in the brain. Deficits in GABA are associated with anxiety. Valium is classified as a Schedule IV narcotic, making it less addictive than cocaine, methamphetamine, and heroin, yet it’s potential for chemical dependency, abuse, and addiction is significant. Long-term risk includes memory loss, dizziness, depression, anxiety, and hallucinations.

Klonopin, (generic name, clonezepa) another benzodiazepine, is an anticonvulsant, anti-epileptic, and anxiolytic drug used to treat depression, prevent seizures and panic attacks, and to control pain. It’s also used in the treatment of bipolar disorder. Klonopin has a mild tranquilizing and sedative effect, which relaxes muscles, promotes restful sleep, and decreases anxiety.

This sedative effect is due to the stimulation of the GABA-A receptors in the brain, along with a reduction of neuron excitability.

Lipitor (generic name, atorvastatin) is a HMG CoA reductase inhibitor, or statin. Used in conjunction with diet, it is used to lower high cholesterol to prevent heart attack, stroke, and complications of type 2 diabetes. Lipitor works by lowering levels of LDL, or bad cholesterol, and raising levels of HDL, which is considered beneficial.

Ambien (generic name, zolpidem) is a non-benzodiazepine sedative and hypnotic used for insomnia. The medication works by slowing brain activity, and positively impacting imbalanced chemicals in the brain. Ambien can be taken as immediate or extended-release tablets.

It’s a habit-forming drug that can lead to addiction and overdose if misused. Because of this potential for abuse, it’s often prescribed for periods no longer than a few weeks. Sedative-hypnotics affect the interaction between long and short-term memory.

Since sudden withdrawal of the drug can be dangerous, it’s important that ambien-use be reduced gradually. Side effects include impaired thinking, slow reaction time, clumsiness, confusion, lightheadedness, dizziness, depression, and unsteadiness.

Who would have guessed that a well-known antihistamine could cause memory loss? Benadryl (generic name: diphenhydramine)) is an anticholinergic drug, a class of medications that block the action of acetylcholine, a neurotransmitter in the brain responsible for memory and learning.

Due to its ability to reduce histamine, benadryl is used to treat allergic reactions and symptoms.Many drugs, benadryl included, more powerfully affect older people because their livers and kidneys aren’t able to clear the medication as quickly, allowing it to remain in higher concentrations in the bloodstream for longer periods of time.

Side effects include sleepiness, drowsiness, fatigue, impaired coordination, and constipation. Long-term use of benadryl has been linked to dementia.

Neurontin, (generic name, gabapentin) is a central nervous system depressant, and an analog of the calming neurotransmitter GABA. It is used to treat spinal cord injuries, multiple sclerosis, neuropathic pain caused by diabetes, epilepsy, and nerve pain caused by shingles. Neurontin is used to treat pain not alleviated by other painkillers. It is also used off label for anxiety and restless leg syndrome.

It works by altering the way nerves send messages to the brain, and can be used in conjunction with other medications for pain relief. Data is sparse on neurontin’s effect on cognition, but studies have found that drugs within the same class negatively impact learning, object recognition, and memory.

Side effects include lack of coordination, drowsiness, weakness, double vision, dizziness, viral infections, and difficulty speaking. Drinking alcohol in combination with neurontin may intensify side effects.

Hydrocone (generic name, norco, bicodin) is a narcotic painkiller, or opioid analgesic, used to reduce moderate to severe chronic pain. This class of drugs works by interfering with the flow of pain signals in the central nervous system, inhibiting emotional reactions to pain. The chemical messengers, mediated by the drug to exert this effect, are involved with memory and cognition.

Amoxicillin (generic name, amoxil, trimox) is penicillin-type antibiotic used to treat bacterial infections, such as pneumonia, urinary tract infections, bronchitis, and sinus infections. Its effect on memory likely has to do with the gut/brain connection. Antibiotics not only destroy bad bacteria in the GI tract, but also good bacteria, which is directly linked to brain function.

It doesn’t help matters that antibiotics are handed out indiscriminately, and are even prescribed for viral infections, notably childhood ear infections. Side effects include headaches, upset stomach, GI problems, insomnia, yeast infections, and allergic reactions. Short-term memory loss has been noted particularly in females above 60 years of age.

Levaquin (generic name, levofloxacin) is a fluoroquinolone, the most commonly prescribed class of antibiotics in the US. Due to their potential to do great harm, fluoroquinolones should only be used for treating the most virulent, bacterial infections that have failed to respond favorably to other treatments.

Fluoride can penetrate the blood brain barrier, causing central nervous system damage. Many fluoroquinolones have been taken off the market due to their toxicity. The ones that remain, carry a black box warning issued by the FDA. Side effects can be dire and can happen quickly, including psychotic reactions and hallucinations, blood-sugar disruptions, brain fog, depression, retinal detachment, and hearing loss.

Memory loss is not a small thing. It changes who you are when you can’t access your memories from the past or remember current details. People often don’t associate their forgetfulness with their medications. This is particularly true of older people, who are on several drugs simultaneously, and frequently blame their memory loss on age.

The more prescription drugs and over-the counter medications one takes, the greater the likelihood their effectiveness will be compromised, or reactions between the drugs will occur. Are you on any medications that cause memory loss? Have you noticed problems with cognition? Let me know in the comments:)

16 thoughts on “10 Medications That Cause Memory Loss [Are You Taking Any Of These?]”